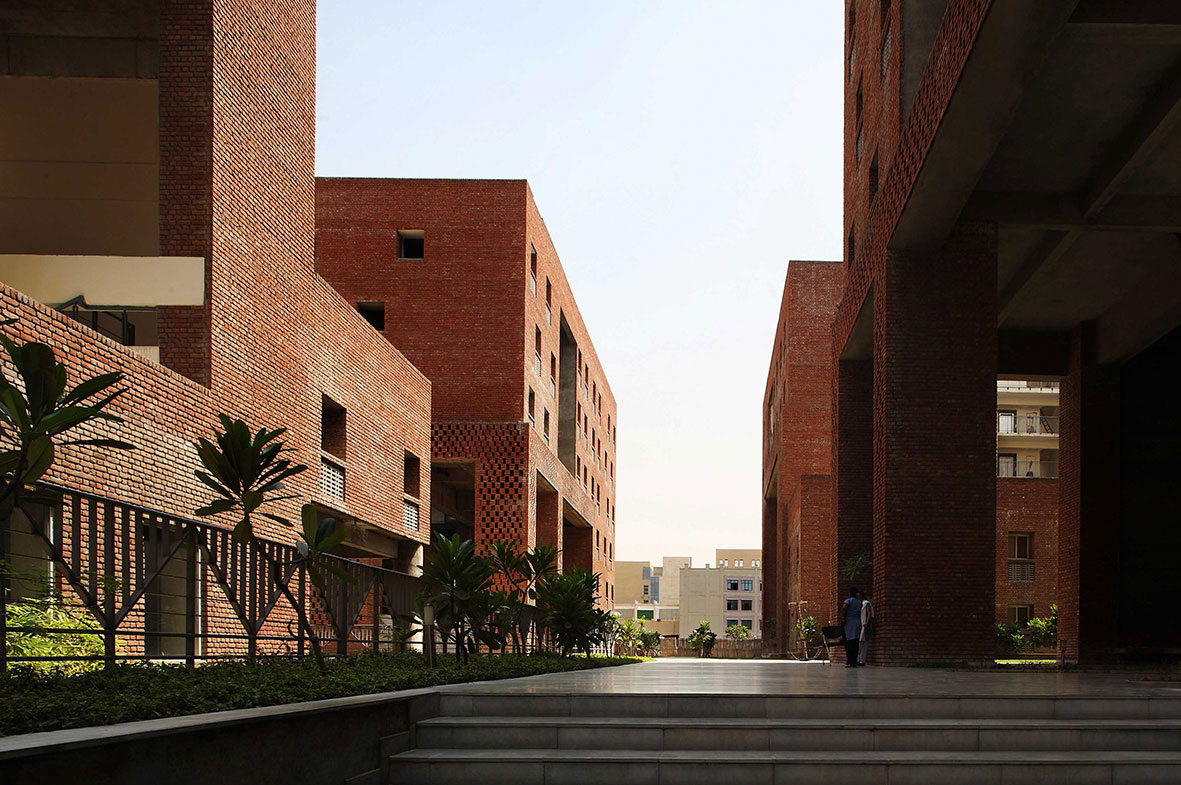 This students’ housing project for IILM by Morphogenesis in Noida uses simple and stark forms to create a layered space for community life. Built as a cluster of student units around courtyards and open spaces at many levels, the housing project has a great emphasis on the transition spaces that cement the large public courts to the students’ private rooms.

The plan is simply organised with two-three units sharing a common space and services. A consistent hierarchy of shared spaces is established and a rich internal atmosphere is thus formed. The use of carved cubes allow good climatic control creating a sanctum and allowing comfort within the in-between spaces. The rhythm and variations in the openings and the detail of the brick façade break the monotony of the imposing scale.

Using a combination of courts of various scale and landscape the campus forms an internal environment that stands independent of the urban cityscape of Noida. While at the collective scale, the courts and the common spaces help contain activity and student life, the plan allows for privacy and retreat into individual rooms. Although there is not much visual evidence of the spatial quality of individual rooms, the benefit of doubt is privileged upon the architect who has been able to create a powerful expression of community living.

The cubes are carved out at higher levels to allow for large common balconies that overlook bigger courts at lower heights. Light thus permeates into all sponge-like spaces. As a student housing, the project is able to achieve spaces with character without using complex forms in the process.

Institutional housing is a very complex archetype that often becomes a backdrop for the most important phase in student life. Very controlled architectural solutions to such programs run a risk of becoming monotonous and repetitive while some schemes fail to create cohesive community spaces and become disjoint from the private life of the students.

This students’ housing is successfully able to use basic architectural forms to create a complex set of spaces that link the private and individual domains to the community areas and generate rich spatial quality at all scales in-between, and therefore, the Students’ Housing for IILM by Morphogenesis is a Citation project in The Merit List.